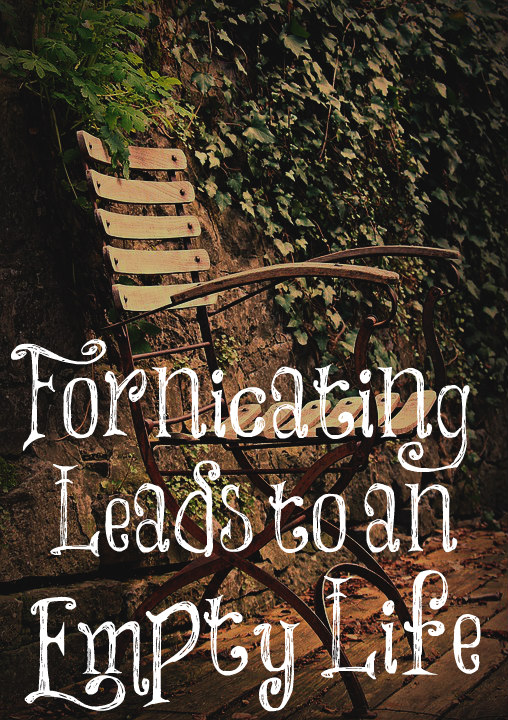 Comment and Statement by Tom:- The Greek word for “fornication” is “porneia”, which means harlotry (including adultery and incest); figuratively, idolatry: The NKJ renders “fornication” as “sexual immorality.” The NIV renders it as “marital unfaithfulness/infidelity.”

As you can see Christianity has made up its own meaning of fornication to mean sex before marriage. Christianity continues to define and redefine itself. I continue to question Christians in these matters.

I was not sure from your comments on “porneia” whether you were arguing for personal support of pre-marital sex. I’ll treat the general issue of the word. The Bible in its entirety is clear on sexuality. Words have meaning in context. Looking at a word such as porneia (proveuo, porna, pornos, moicheia, etc.) is only a prelude to understanding the specific idea the writer is conveying to the reader within a set of words. In addition, there is usually a broader context within which a set of words is placed. This can be within a sentence, paragraph, theme, chapter, book, testament, or entire work. To fully capture what a writer means for the reader to understand by a word or idea, one must consider its whole context, as well as its immediate context. Even beyond a particular word usage is the greater linguistic context of the language—its origins, historical development, borrowed influences, etc.

“Porneia,” as used in the New Testament, has a milieu involving the use the word in Classical Greek, in the Septuagint (LXX), in the Intertestamental period, in Koine Greek, and in Patristic Greek. Looking at these linguistic periods it appears that the word is primarily used for “fornication”, both within and without marriage. The LXX uses it predominately for the Hebrew word “zanah”—” commit fornication, be a harlot.” This is sexual involvement with humans or false gods. Israel is the bride of God and “fornication” (idolatry) with other gods affects the relationship. (See the minor prophet Hosea who is told to retrieve his unfaithful wife out of harlotry as an image of God’s care for apostate Israel.)

The Patristic period after the New Testament uses the word in various manuscripts with meanings of “fornication,” “unchastity,” “sexual impurity,” “illicit intercourse,” “prostitution,” “adultery (as grounds for divorce)” and “idolatry.” So, the question is “what did God intend for the word to convey to the early Church?”

Matthew 5:32 says: “But I say to you that everyone who divorces his wife, except for the cause of unchastity (porneia), makes her commit adultery (moixaw).” 1 Corinthians 5:1 says, “It is actually reported that there is immorality among you, and immorality (porneia) of such a kind as does not exist even among the Gentiles, that someone has his father’s wife.” There is the figurative usage of the word as spiritual prostitution or harlotry represented where Scripture says, “Fallen is Babylon the great, she who has made all the nations drink of the wine of the passion of her immorality (porneia)” (Rev. 14:8). Finally, the New Testament clearly uses the word as a warning against premarital sex in 1 Corinthians 7:1-2 when Paul writes “it is good for a man not to touch a woman. But because of immoralities (porneias), let each man have his own wife, and let each woman have her own husband.” What we see then is that porneia speaks of more than a sexual encounter only within marriage or only outside of marriage.

Without using the word porneia the Bible still teaches sexual abstinence before marriage. Genesis 2:24 says that a man shall be joined to his wife, and they shall become one flesh. There is a unity implied in the sexual act which is more than just metaphorical. Oneness is physical and spiritual. Israel clearly understood this, since prospective wives were to be virgins. Paul addressed this issue in the New Testament in his warning against temple prostitution—one of the organized religions of the day. “Do you not know that your bodies are members of Christ? Shall I then take away the members of Christ and make them members of a harlot? May it never be! Or do you not know that the one who joins himself to a harlot is one body with her? For He says, ‘the two will become one flesh.’ But the one who joins himself to the Lord is one spirit with Him. Flee immorality (porniean). Every other sin that a man commits is outside the body, but the immoral man (porneuon) sins against his own body. Or do you not know that your body is a temple of the Holy Spirit who is in you, whom you have from God, and that you are not your own?” (1 Cor 6:15-19) If a man or woman, single or married, has sex, there is a oneness union implied. Clearly, this oneness is physically and spiritually reserved for marriage in God’s perfect design.

Somehow you have linked various translations of the Bible with the idea that Christianity is making up meanings. The word legitimately has all the variations you mention. The germane issue is the immediate context in which the word is used in the Bible. However, the Bible in whole, written by God, clearly teaches the legitimacy of all meaning of the word. You do not need to become a Greek linguist to understand the Bible. Read it from cover to cover and it is a clear unity. There are many helpful resources (books, classes, software) available that allow a person to go as deep into word study as they want to go.