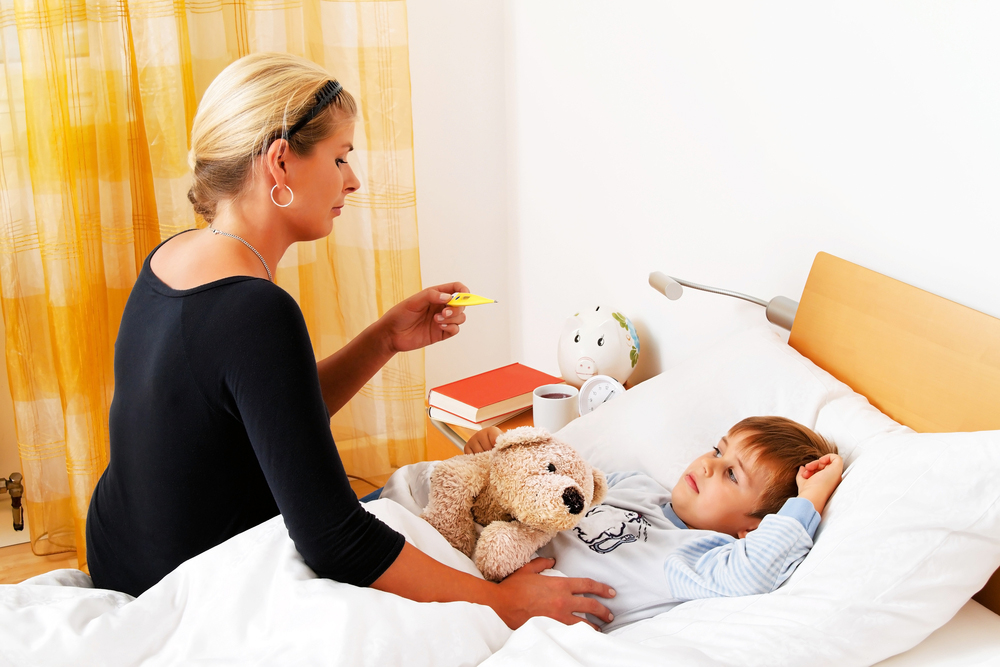 In my opinion, the biggest barrier to intelligent management of childhood illnesses is fear which comes in many forms:

Fear of trusting our own judgement and intuition because we have been lead to believe that only the ‘professionals’ are qualified to make decisions about our children, Fear  that diseases that were once regarded as part of growing up are now ‘killers’,

Fear  that without high tech interventions our children will suffer disability or  death,

Fear  of symptoms such as fever, cough or rash,

Fear  that without paracetamol or ibuprofen, our children will all have febrile convulsions,

Fear  of every rash, that it might be meningitis

Fear  that the world outside is full of random bacteria and viruses that are just waiting to strike our children down,

Fear  that without antibiotics, no child will come through an illness,

Fear  that without vaccination, no child will reach adulthood.

We even seem to be afraid nowadays that our children cannot cope with fresh air, so we keep them cooped up in over heated houses instead of putting them out to play in all weathers as our grandparents and great grandparents were

It is not surprising that there is so much fear in the realm of healthcare, or more accurately, disease care.  If you feel this way, it is because that is how your doctor, health visitor and practice nurse feel too.  Unless they have studied an alternative health philosophy, all they know about infectious disease is ‘The Germ Theory of Disease’ – all those bugs are out there waiting to get you, and if you don’t have the latest antibiotic/ vaccine/ antiseptic/ bleach your child’s toys three times a week, you will contract a hideous disease that may be mild in some cases, but could, without doubt, attack and harm your child, leaving them disabled or dead.

“Any attempts at finding out the circumstances of the case, the prior state of health of the child, details about their treatment before or after reaching hospital are met with absolute silence – the idea seems to be to promote fear, not understanding.”

No wonder so many of us reach for the bottle of paracetamol, sterilise our houses, don’t allow our children to pick up food they have dropped on the floor, and vaccinate with 25 different vaccines by the time they are 13 months, according to the latest schedule (29, if your child gets the BCG and Hepatitis B vaccine)

We are also encouraged to fear by the sensationalist handling of disease in the media.  We hear horror stories about an increase in cases of measles as if it were the black death. If a child can be found who has died, the story is paraded four times an hour on news bulletins and splashed across all the newspapers with the savage delight of a pack of hounds pulling apart a fox at a hunt.  Any attempts at finding out the circumstances of the case, the prior state of health of the child, details about their treatment before or after reaching hospital are met with absolute silence – the idea seems to be to promote fear, not understanding. Even a visit to a farm is clouded with dire warnings of ‘Deadly E.coli risk’!

Does this fear matter? Yes it certainly does, because a frightened parent is a stressed parent.

The immune system is a delicate, sensitive and wonderfully intelligent apparatus.  A child, and even more so, an infant, sees the outside world through the lense of their parents feelings and understanding.  It is only later that they take their first independent steps along the path of self knowledge.  Common sense tells us that stressed mothers cause stress in their babies, and this has been confirmed in studies.  Stress causes outpourings of steroid hormones which, after an initial boost, cause a lowering of the effectiveness of the immune system. So you enter a vicious cycle, you fear that the worst will happen to your child, this lowers you child’s ability to cope with their day to day life, and when they get ill, lowers their ability to cope with the illness, then they go on to get complications and there you have it: a self fulfilling prophecy.

So what can we do?

We can put our feet back firmly on the ground, take a nice calm deep breath in, and an even longer one out and look at the facts.  If it were really that difficult to reach adulthood, none of the human race would have reached the twenty first century.  And if you look back at recorded history, the real killers throughout the ages have always been: war leading to  famine causing pestilence and then death – the three horsemen of the apocalypse. Worldwide, clean water has saved more lives than any other single intervention.

I believe that every parent inherits the ability to care for their child, in much the same way as we inherit the colour of our eyes, hair or skin.  All the tools we need are inside us already, all we need is practice in their practical application.

The great American naturopath Herbert Shelton was fond of saying:

“happiness, contentment and cheer should be cultivated with as much care and

persistency as the gardener exercises in the cultivation of his plants.”

So cultivate self confidence, optimism and faith.  Faith in yourself that you have been endowed with everything necessary for your present task, and faith that you and you children have been born into a supportive world where there are many more good people than bad, and abundance of what we need rather than lack.

This article first appeared in The Informed Parent  2008 www.informedparent.co.uk